Krithika is open to learning 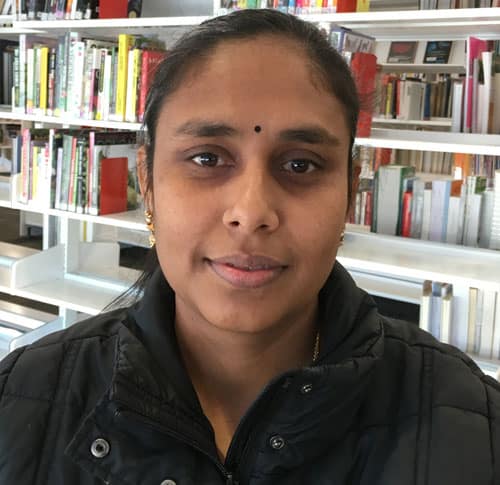 Krithika, her husband, and her young son, migrated to Australia from India nine years ago. She is a permanent resident of Australia and she completed her AMEP Certificates 1 and 2 when she first arrived. She contacted Read Write Now because she wanted to improve her spoken and written English with the aim of finding volunteer or paid work. Her son is at primary school and she has time to learn now. She has been having English lessons at the Cannington Library every week since April this year. Krithika was born in Tamil Nadu at a time when the only official medium of instruction in Tamil Nadu was Tamil and she was forbidden to learn English, Hindi, or any other Indian language. She has a Master’s degree in Tamil literature, but despite that qualification, has said that she was considered not well educated in India because she could not speak English.

Krithika knows that being clearly understood when she speaks and writes English, and clearly understanding written and spoken English, is very important to living in Australia. Her husband and son are more fluent in English than she is, and she wants to be able to keep up with them and also to help her son at school, talk to his teachers, and his friends’ parents, and to be able to make appointments and write and understand letters.

She regularly borrows English books and audio books from the ESL section of the Library to increase her vocabulary, and improve her pronunciation and comprehension. She watches English language TV and movies to increase her understanding and exposure to different ways of speaking English.

She has expressed an interest in enrolling in a beginners’ computer class this year (to help her with studying online), and is currently learning to drive. Next year she hopes her English is good enough for her to enrol in a local TAFE course in Early Childhood Education (Certificate III), Aged Care, or Disability Services.

Krithika has not missed a single class this year, despite having to walk long distances from the bus-stop to the library in the blazing heat, or freezing rain. She is very motivated to learn and completes her homework every week. Her husband often works in remote areas so Krithika is the primary caregiver for her son. She has no family here but has a good network of friends from her temple. She is very open to learning about other cultures and engaged with the world outside her home.

This can be illustrated by a story Krithika told me about how her grandmother learned to read and write Tamil in the days when only boys were educated in village schools. Her grandmother used to hide outside the classroom and look through the window at the teacher so she could see what he was writing and then she would practise forming her letters in the dust. Her grandmother passed on that fierce will to learn to Krithika who attained a Masters degree in Tamil literature. Unfortunately Krithika’s family was not wealthy and she had to work for 8 years in a hostel as to support her family, so she did not have the chance to become the language teacher that she had wanted to be.

She married, had a son and came to Australia, far away from her family and her husband’s family. Krithika has always viewed proficiency in English as a necessary skill to have in order to be able to take part fully in Australian life. Her husband and her son are very supportive of Krithika joining Read Write Now. Her husband and son would be justifiably proud of her when she is working outside the home.

Krithika is very happy and grateful of the life she has in Australia and frequently thanks the services provided to non-English speaking migrants by volunteers working for organisations such as Read Write Now.

Krithika would like to enrol in a TAFE course at Certificate III level either in Early Childhood Education, Aged Care, or Disability Services. She is aware that she needs to become more proficient in spoken and written English before she enrols, and is interested in initially offering herself as a volunteer so she can learn skills and specialised language needed for those roles.