A ‘can do’ attitude 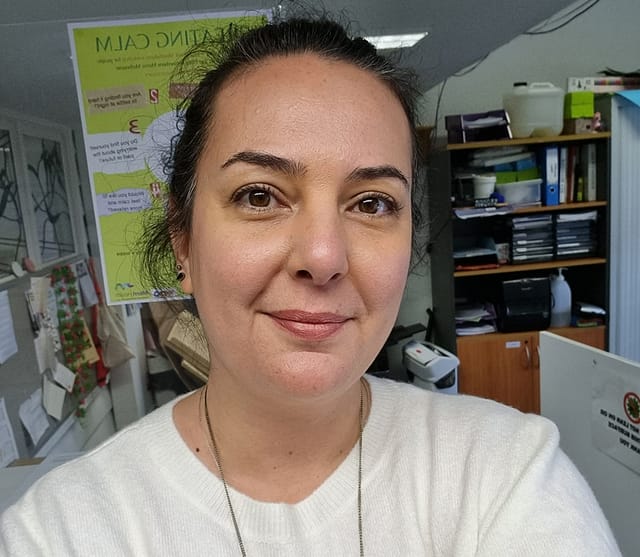 Seda is originally from Istanbul and Turkish is her first language. She found out about Reynard Street Neighbourhood House (RSNH) via social media and joined classes in July last year, initially attending in person and then joining classes online during lockdowns. Seda has continued with face-to-face English studies at RSNH this year.

Seda shows a high level of commitment and dedication to the English classes at RSNH. She brings enthusiasm and a ‘can do’ attitude to class. She is genuinely interested in learning – not only learning English but also learning about herself, about others and about the world we live in. In mixed-level classes, Seda often supports learners less skilled in English. On a number of occasions she has taken on an informal mentoring role in class, and has volunteered as an assistant in Conversation class, to help me in supporting literacy-level learners.

Outside the classroom, Seda has also become a volunteer in other activities at RSNH, occasionally working in the kitchen to help with Community Lunch and also in the office. Seda plans to start a Conversation Club / storytelling group later in the year, which she will run, to engage both others learning English as well as native speakers in a weekly catch-up.

The EAL classes at RSNH have helped Seda find confidence with her English and have given her a sense of connectedness during difficult times of social isolation. Seda moved from Turkey with her partner just before the pandemic. The usual difficulties experienced with migration that so many people experience were exacerbated due to the lockdowns: simple things – like catching up for coffee with new friends – were not possible. For Seda, attending classes online represented an opportunity to meet others and engage with the community around English classes at RSNH during this difficult time. Now that we’re back face-to-face, Seda has continued to play a vital part in this community. Her involvement as a volunteer at the house and her plans to start the Conversation Club are testimony to this.

In practical terms, the classes at RSNH supported Seda to get a casual retail position in a Turkish grocery store and engage in English with customers, an important first step towards securing employment in other areas. Seda also volunteered at Kew Toy Library for one year and the Cat Protection Society of Victoria for 6 months.

Beyond this, her experience in English classes has led her to discover that she enjoys helping others with their learning. This has inspired her, and in the future, she plans to study Education or Social Work with a view of working in these professions in Melbourne. This is a significant departure from her previous work as an accountant in Turkey. Seda would make excellent contributions in teaching, social work or any career she chooses to pursue.

Seda will continue to study in the English classes at RSNH. She is currently investigating Certificate IV in Community Services, Certificate IV in Mental Health, and a Certificate IV in Education Support as potential stepping stones to further study. She is also keen to volunteer at Coburg library and find opportunities as a teaching assistant.