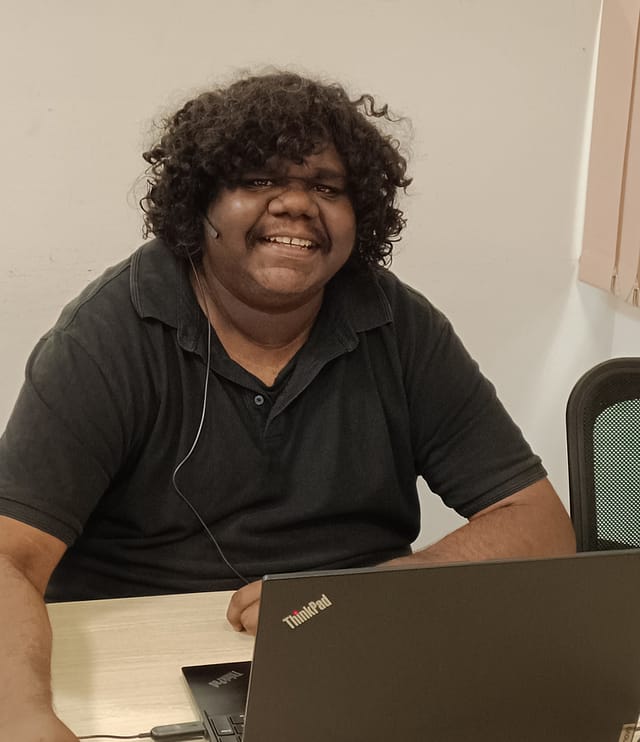 Daryl is a young Indigenous man living on the outskirts of Palmerston in Darwin, NT. He heard about STEPS Group from his brother who found meaningful work after completing Skills for Education and Employment (SEE) program with STEPS.

When Daryl heard that STEPS offered the Certificate III in Business course, he approached his Employment Services Provider and asked to be referred. He was apprehensive at first, however, he was greeted by a very friendly receptionist and assessor, making him feel instantly at ease.

“Everyone made me feel so welcome”, Daryl says.

Daryl is a shining light; his friendly nature is refreshing and he has this charming way of making an instant connection with everyone he meets. Honestly, absolutely everyone!

Since enrolling in March he has eagerly participated and engaged in his studies every single week without fail.

“Daryl is every trainer’s dream. He follows instruction, completes his tasks and then takes the initiative to assist other classmates. He is the first to arrive and the last to leave – leading by example”, said his Business Trainer, Lauren.

Lauren describes Daryl as having potential to be a great leader and mentor one day. His capability was notably exhibited in a teamwork activity whereby he instinctively led the group. He was assertive, inclusive and friendly, and his disposition meant that the entire group felt at ease. It was uplifting to see and hear Daryl get every single one of his peers involved in the task – a real team player and without even realising it, an outstanding role model.

Daryl had previously studied construction, so the business course would be very different. He recalls thinking ‘will I actually be able to do this?’

At that time, Daryl was working as a labourer. He describes it as really hot and hard physical work, especially in the tropical Darwin NT climate. When Daryl heard about the STEPS Business course, he jumped at the chance to enrol.

Daryl has always been interested in computers and video games and would love to one day work in this area, “I would love to work in an office”.

What a difference six months can make! Daryl has fully embraced his study, attending classes for 25 hours every single week. He works hard and supports his peers, always with a huge smile and positive outlook. He is a breath of fresh air.

STEPS staff and trainers have witnessed his confidence skyrocket, his shyness fade, and his excitement grow as he progresses through his studies. When asked about his favourite part of the course, he said, ‘It’s the team meetings. I like to meet and talk to other students from different areas, we get to learn a lot about each other, and we support and care for one another.”

Daryl moved around a lot when he was younger, and school was not a positive experience. Despite these challenges Daryl is a true gentleman and has a way of making everyone around him feel calm and cheerful. The SEE program has given Daryl the self-belief, direction and the ‘leg up’ that he needed. He now has big plans for his future, and we are excited to witness his journey. We have no doubt Daryl will go far and accomplish his dream job. Any employer will be incredibly lucky to have him. We look forward to keeping in contact with Daryl to hear of his future achievements.

“I want to build a good future for myself, and I want a good job”, says Daryl. Given the opportunity, Daryl would absolutely flourish in a creative arts or graphic design course. This would allow him the opportunity to pursue his dream of becoming, as he would call it, a ‘skilful digital artist’.

Daryl has a strong passion for the arts, appreciating drawing, film and media, while also fantasy, adventure and role-playing video games. Bringing these topics up are like lighting a flame to a ready campfire. Daryl has expressed his interest in the digital arts world, presenting several drawings to his trainer in class. The idea to create, adapt, change and alter his own drawings is very appealing to him. The concept of using specialist software to tinker with artwork to the ebb and flow of his own inspirations, has him most excited about the future ahead.

Daryl is the perfect example of a dedicated and motivated adult learner. He has a passion for life and deserves any opportunities that come his way. He is absolutely worthy of this nomination, with a bright and creative future ahead.