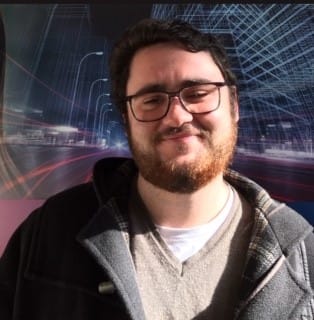 I met James Welch when he joined my Foundation Skills class, which is one of the classes offered in the SPARK JobTrainer Industry Explorer Program delivered at Canberra Institute of Technology (CIT) in partnership with Ginninderry, a new joint venture of urban development project between ACT government and the Riverview Developments Pty in West Belconnen, ACT.

The SPARK JobTrainer Industry Explorer Program is 13-week full-time training across seven industries and the participants will be equipped with a selection of trade and employability skills necessary for the possible future career direction/paths they may pursue. It is a course offered to young people that currently are not employed. In my Foundation Skills class, in particular, participants studied units of competencies to upskill their communication, reading, writing and digital literacy skills to be work-ready.

James joined the SPARK JobTrainer Industry Explorer 1 Program earlier this year but had to drop out due to family commitments. Despite barriers, James decided to enrol himself in the SPARK 2 program which started on 24 May 2021. This time James was determined to do something good for himself by trying to participate fully in the program, seeking study support when needed and trying to overcome his personal barriers and he finished the program successfully. James has completed all six units of competency in the Foundation Skills class.

In the early days of the program, James was overwhelmed with the context. However, he proactively approached the youth support person, the class mentor and me, to ask for support. The mentor and I then sat with James and discussed strategies to help him address his concerns about doing assignments, journals, quizzes and learning. I also reassured James that he could do what he set his heart on if he was willing to try. Later, I observed that James persistently asked questions and sought support, if needed, and also consistently, and diligently followed the steps and suggestions we offered him. He shared that he tried to be less afraid of asking questions. He gradually became better at collaborating with others in problem solving. By the end of week five, I noticed that James was more confident and did well in class presentations, class discussions, team building activities and completing his individual work. With these achievements, gradually James built up his confidence. He was able to be on top of all the quizzes, journals and the assessments he had to do. He was often ahead of his peers in submitting his online work.

The units in Foundations Skills have been developed to encourage participants to get acquainted with their learning styles, learning strategies, plans and goals, employability skills as well as their career planning. James wrote that after joining this program he knew himself better, understood his learning styles and learning strategies, and has developed his reading strategies, time management, problem solving and negotiation skills. During one of the reflection sessions, he shared with the class his three achievements after participating in the program. The first one was that he persisted and that he had developed learning strategies which suit his learning styles. The second one was that he had made bigger strides in growing his executive functions and organisation skills and the third was that he realised he needed to further develop his IT skills and pursue a career in either horticulture/agriculture or cyber security. He finished his reflection by adding that he was glad he was exposed to ‘school’ again and his decision to persistently seek help/support paid off.

Should he win this scholarship, James wants to enrol in CIT to get a certificate or diploma in Horticulture or Cyber Security, as the second option with a longer term goal of going to university.