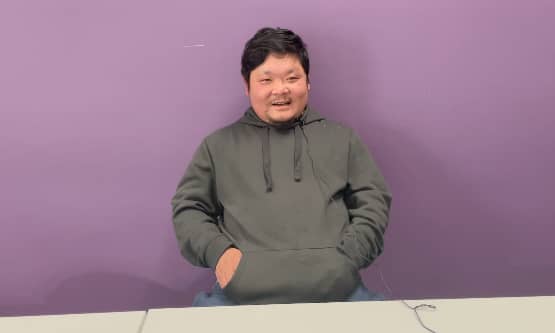 Saw Ei La Yar first attended my AMEP class about three years ago. He showed a keenness to learn and worked very hard. He was very studious. He wanted to make a better life here in Australia for his young children and himself. Once he finished his hours in the AMEP, he was determined to further his English study by attending the Skills for Education and Employment (SEE program).

Earlier this year Saw’s tutor Christopher observed him waiting outside the Wyndham Community and Education Centre office. Saw mentioned that he wanted to get into Building and Construction and become a bricklayer. He enrolled in the pre-accredited Skills for Work and Study (Building and Construction) course and learnt about the industry and improved his literacy and numeracy. He was attending the Skills for Education and Employment (SEE) program at the same time.

Saw showed determination, enthusiasm and belief in himself throughout the course. He attended the class regularly and was well prepared. He expressed earlier that he wanted to be just like his brother-in-law in becoming a bricklayer. He discovered and saw the opportunity that the Skills for Work and Study (Building and Construction) course would provide for him. He made the course a success and brought it to life.

Saw expressed to his fellow classmates in the SEE program and his friends that doing the Skills for Work and Study course is worthwhile.

‘Saw had always been a talkative, good natured and well-mannered student, and studying the building and construction course gave him something to discuss with classmates that differed from what they were familiar with, and I sought to provide Saw with chances to share his experiences in the course with classmates. Sometimes in the SEE program, particularly at lower levels, students can struggle to envision work-related outcomes for themselves or how they would begin to achieve such eventualities, so word of Saw’s endeavours provided a good reference point for talking about potential pathways and to get students thinking about the diverse range of opportunities available to them beyond the English language classroom or the narrow set of career paths they might feel suited to,’ explains Christopher.

Saw has been an inspiration to others. He continued to study in the SEE program while doing the Skills for Work and Study course. He knew that the SEE program would provide him with the necessary support while undertaking the course. As a result of the course, Saw enrolled into the White Card training and was successful. He now currently has his White Card and is working as a bricklayer’s labourer with his brother-in-law. Saw would not have passed his White Card if it wasn’t for the Skills for Work and Study (Building and Construction) course and he wouldn’t be where he is now – a very strong impact, to say the least.

As his teacher in the Skills for Work and Study course, Christopher was truly amazed with how Saw’s confidence has grown.

Saw would like to pursue his career further by enrolling in the Pre-apprenticeship Building and Construction course and then onto a Certificate III in Block and Bricklaying. Saw would provide an inspiration for others in the future who wish to enrol in the Skills for Work and Study course, not only throughout the state but also in the Wyndham Community and Education Centre and in his local community.