Teagan is honing her craft 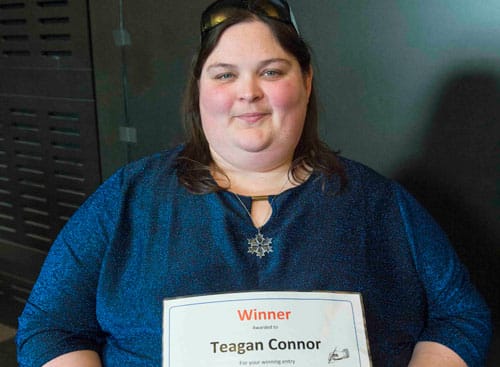 Artlife, a program at Footscray Community Arts Centre, seeks to engage artists with a disability in collaborations with professional artist facilitators. Teagan initially connected with Artlife to develop her visual art and illustration, but soon expanded her practice when she discovered her passion for writing. In participating in Artlife workshops, Teagan gained the space and support to start writing short stories.

She was inspired to write as a response to her illustration, where she used words to describe stories about characters and scenes. Teagan is currently working on her first novel, ‘Mystiria’.

Teagan is a multi-skilled artist who uses workshop time in the Artlife program to learn and develop her skills in animation, illustration and writing. Teagan joined the Artlife Residency program to further her learning in 2019. This program profiles Artlife artists who are particularly dedicated in what they do, so they can deepen their learning and identity as an artist.

Teagan was nominated for the Dulcie Stone Writing award for her first short story ‘Colours of Autumn’, a story which encourages people to be who they are. She won this award and gave a reading of her story during the awards ceremony.

When asked about the impact that Artlife has had on her life, Teagan said ‘When I first started, I was allowed to do things at my own pace’, which has been crucial for her learning. Teagan has developed many new skills during her time in Artlife, such as stop motion animation, sound art, illustration and writing. Artlife has also provided opportunities for Teagan to exhibit her work in public spaces. Teagan’s work has featured in exhibitions and festivals such as West Projections, Gertrude st Projection festival and the (upcoming) Due West Arts Festival. Some particular achievements for Teagan have been exhibiting her work, ‘The Winter Labrinth’, in the Ampitheatre in the grounds of Footscray Community Arts Centre, as well as winning the 2019 Dulcie Stone Writing award.

Teagan wishes to receive artist mentoring, to focus on building her skills with aspects of writing. Teagan is particularly interested in integrating her passion for fan-fiction into her own work, as well as learning strategies for working through ‘writers block’, so that she can bring more dedication to her work. Teagan is currently developing a novel, ‘Mystiria’, which she has already put a significant amount of work into. Teagan would benefit from receiving support to complete this work while exploring avenues for publishing and promoting her novel.

Artlife offers mentorships for artists who are already established in their artistic practice, and are paired with a mentor to work towards a project. This would be suitable for Teagan to further progress her novel and learning about being a writer. Writers Victoria Mentorships would also be an excellent opportunity for Teagan to learn more about the craft and business of writing.