Some programs or events listed may be affected by COVID19 restrictions. Remember to make contact with organisers first. 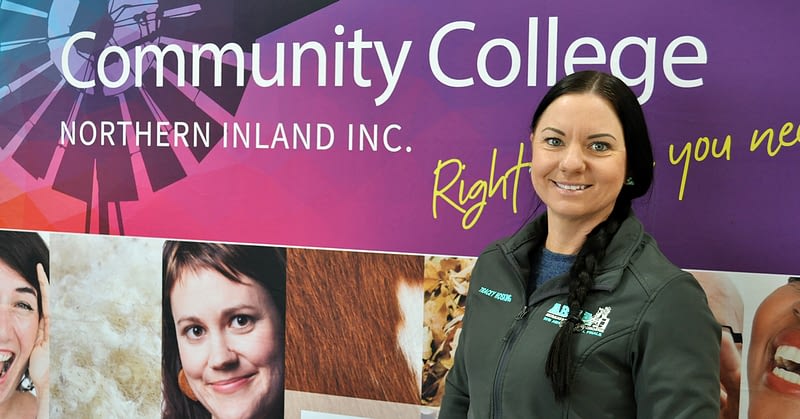 Tracey lives on a sheep and cattle station in the small rural settlement of Bundarra, on the Northern Tablelands in New South Wales. She worked in the local corner store for 14 years, mostly she says, because it was convenient, until her hours were cut back due to a downturn in business during Covid-19 and she stepped back to home-school her kids.

During the months she was off work Tracey decided it was time to consider a change in career. After applying for several positions with no luck she came across an ad seeking care staff at a disability service in a nearby town. At first, Tracey was uncertain about working in disability services but she submitted a job application thinking that a care role might be a stepping stone to something else. The next day, Tracey heard an ad on local radio promoting training to work in the Aged Care sector. She wasted no time enrolling in the Certificate III in Individual Support specialising in Ageing at the Inverell Community College Campus.

It wasn’t long before Tracey was contacted by the disability services provider who offered her a position as a care worker with their organisation. During her interview Tracey told her new employer that she wanted to complete the Aged Care training that she’d started.

Tracey admits to being scared about her new role but navigating a new field of employment wasn’t the only thing placing Tracey out of her comfort zone as she worked toward her new career. During her study she also supported her children’s learning through home schooling, and travelled long distances to attend face-to-face learning sessions while she completed her Certificate III in Individual Support qualification.

In the lead-up to her training, Tracey and her husband had spent every waking hour searching for ways to feed their sheep and cattle—water had dried up on their property and stock feed was hard to come by due to extreme demand in a region hard-hit by drought. They battled with hundreds of kangaroos and deer coming onto their property eating the last traces of grass, leaving them hand-feeding horses on mats so they didn’t pick dirt up with the hay as they ate.

The drought wasn’t the worst of it—dry storms came, with lightning that hit dead trees, starting bush fires fanned by incredible winds throwing embers all over their place. Tracey recalls the fire trucks and chopper that worked around their property for weeks, and Christmas Day spent with her kids fighting fires and moving stock around their property to keep them alive.

In recent times, Tracey and her family have fought off an onslaught of mice that tore through their shed eating everything in sight, including their bridles. In spite of the personal challenges Tracey continues to face she is still positive about her future and determined to work hard at what she sees as a rewarding new career and ongoing study that is changing her story.

Tracey “didn’t even finish Year 12” — as an early school-leaver, she thought that working in her local convenience store was pretty much the end of her story. Fearing her working life would be spent “hopping from jobs like that”, she took a chance on herself that would build her confidence and open up a world of choices.

After completing her first qualification Tracey no longer talks about being stuck in a job out of convenience and instead talks about her new direction, where she wants to be and what career she wants to take on. Taking part in an adult education program gave Tracey the skills and knowledge she needed for employment but the real impact of her learning—as Tracey discovered—was to give her control of her life and her ongoing learning journey.

Tracey is now a strong advocate for adult learning, encouraging co-workers to get a formal qualification that will give them additional skills in their day-to-day work and telling them “you’ll come out of this journey with so much more than a piece of paper”.

Tracey is already furthering her learning journey – after completing the Certificate III in Individual Support – Ageing Specialisation and embracing her new role in disability services she enrolled in a Disability Skill Set that when complete, will give her a dual qualification. She has also enrolled in an upcoming Certificate III in Community Services course at Inverell Community College and in the future hopes to upgrade her qualifications to a Certificate IV or Diploma level.

Tracey sees a great value in studying related courses that will give her transferable skills she can use across multiple care-career roles, and to help her become a more effective leader and advocate for vulnerable and at-risk people.

Dedicated to her studies

Pride in his own abilities

A natural teacher and learner

A continuous quest to learn

We acknowledge the Traditional Owners of country throughout Australia and recognise their continuing connection to land, waters and community. We pay our respects to them and their cultures; and to elders both past and present.